You are amazing. I really appreciate the help on this. You all make a rad tripod and I really appreciate the great customer service.  I’ll go to the provided site and get the ball rolling.  Thanks Jay...
I would like express my overall happiness with your products,... The quality and design is better than most other tripods out there. The sturdyness of the tripod makes me confident that it will hold up to some abuse. Which it will get when backpack hunting and hunting in general. I also appreciate the telescoping center post and the reversible legs. Which makes it easier to fit into my hunting pack.
Thanks for manufacturing quality products. I can tell that you have a dedicated team of individuals that care about their work.
Best of luck and keep up the good work."


Sniper training week was a huge success.  Everyone was impressed with the tripod and the GunPOD.  One guy in the class ordered a complete setup on Tuesday, and had it in hand for class Thursday.  Another team leader came by and after seeing the setup, told his guys to order 5 of them when they got home.  And I just got an email form a student who said he just ordered one for himself.   Snipers need to see and handle products to feel confident about buying them.  Show and Tell with your tripod system is selling itself.

Last week I took my son JJ (10) out on a pig hunt in OK for his 10th birthday…  We were sitting together in a blind and at last light a group of pigs came out in a field about 600 yards away …  We got to about 200 yards from them and …We were setup with a Field Optics tripod, your ultra-light tripod head, and had the M-Lok to ARCA attachment on the rifle.  When he pulled the trigger, I saw all the pigs take off running into the brush and I thought for sure he missed but … we started walking up to see if we could find any blood and to my surprise, he had dropped the pig dead in its tracks.  I am super thankful for having that memory with my son and I know he couldn’t have made that shot without a quality mobile setup.  ..thank you as your products certainly contributed and helped make for a really special three generation father/son hunting experience. 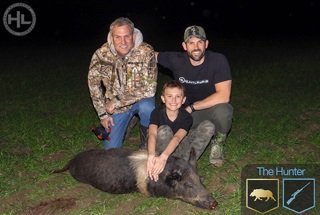